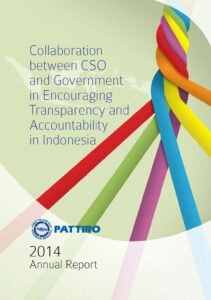 The 2014 Annual Report takes Transparency Focus Area as the main theme, which highlights PATTIRO’s journey in promoting transparency issue, lesson learnt, and further agenda. The emphasis on transparency issue is regarding the fact that most activities performed in 2014 are related to it.

From such experience of promoting transparency issue, some lessons learnt at community level are that community center/CC is quite effective as the means of citizen’s learning center regarding transparency; advocacy cannot be conducted in a vis-a-vis manner, in the sense of contrasting between government and communities; and the importance of building civil society coalition as part of public information transparency catalyst. At the level of public agencies, we see that the implementation of the FoIA has changed public officials “closed” mindset into an “open” one. Besides, the award mechanism is quite effective to encourage local and national government agencies to implement the FoIA. Another lesson learnt is that citizen’s request of information is important to streamline information services of
public agency. As for Information Commission (IC), community’s participation in establishment of Provincial IC and recruitment of commissioner processes becomes a crucial aspect in determining the effectiveness of Provincial IC. Moreover, the support of provincial government, especially in the allocation funds for operational, secretariat, and activities, contributes to determine the performance of Provincial ICs.

Regarding the benefit of transparency, there are some benefits for communities and the public agency itself. Communities have the opportunities of being exposed more to information (information-literate), thus encouraging them to express their needs, complaints, or suggestions for improvement towards the government services. When the feedback from citizen is responded positively by public officials, it will lead government agencies to be more responsive and accountable.