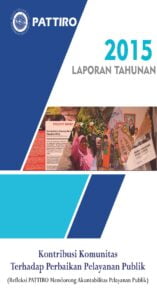 For PATTIRO, 2015 was a time to solidify its position on two main issues: Health and Village. The ﬁrst is strongly associated with a variety of successful initiatives launched in response to the conclusion of the Millennium Development Goals (MDGs) and the commencement of Sustainable Development Goals (SDGs). And the latter includes several pioneering initiatives in response to the implementation of the Village Law.

The report is focused on the issue of how accountability of public services is implemented. On implementation, transparency of information relevant to the citizens is a basis to carry out social actions. This is done by three stages, namely collecting information, and then sharing the various pieces of information in the community; followed by developing a plan of social action; and implementing the social action.

We can ﬁnd the three stages in various forms of descriptions in this annual report. For example, in all three stages have been tested in a hundred villages, while in 41 villages monitored by a partner, two elements of the action plan were not executed. Or this can take the form of a multi-stakeholder forum with a highly ﬂexible action agenda, in which disability activists were engaged after they were involved in a participatory survey. Several lessons were learned, such as how raising the issue of social inclusion for vulnerable groups cannot rely on the conventional approach, and the necessity for comprehensive action. Other lessons include learning how to intervene in rural communities without creating dependency.

Let us dive into the meaning and learn about transparency for accountability.