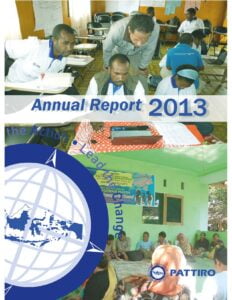 Center for Regional Information and Studies {PATTIRO) was founded in 1999 and has produced many outputs and reached important achievements in influencing major reforms to the Indonesian society and good governance within the Indonesian Government. Through its three focus areas, PATTIRO has always ensured the existence of social accountability in the implementation of local governance that will be beneficial for the society.

PATTIRO’s work in 2013 produced important achievement in accordance with its three focus areas. Its achievement t has shown that PATTIRO is focused and able to create reforms in Indonesia, especially in the implementation of local autonomy. Various programs are managed by PATTIRO either as a grantee or as an implementing partner, with the support of donor institutions and projects.

One of the important achievements is the formation of 25 CSO networks in 5 pro­vinces and 20 districts in Eastern Indonesia that are concerned for a better public finance management. Other important achievement is reallocation of duty trip budget into the education budget by the East Nusa Tenggara Provincial Government as successfully advo­cated by the Civil Society Network that are Concerned for Public Services (Jormas PPP) and facilitated by PATTIRO. While within the gender budget issue, one of PATTIRO’s achievements is that 10 provinces have start­ ed to implement gender-responsive planning and budgeting (PPRG) principles in the local budget allocation plan (RAPBD).