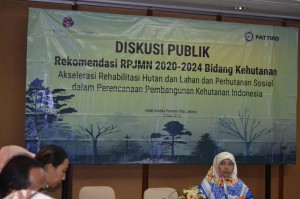 JAKARTA, KOMPAS – Efforts to rehabilitate forests and critical land in Indonesia have found difficulty catching up to the extent of tree cover at the locations to be rehabilitated. Although in this year the forest and land rehabilitation budget was increased by 325 percent to achieve the target of 205.78 thousand hectares, it is going to take almost 70 years to work on all critical lands, with an area of ​​14 million hectares.

Moreover, in the social forestry program, it is possible to carry out RHL through Minister of Environment and Forestry (MEF) Regulation No. 105/2018 and MEF Regulation No. 88/2018. Community groups who obtain social forestry permits can propose the locations of RHL in protected forests and production forests, except in the area of ​​business licenses for the utilization of timber forest products – community plantations (IUPHHK-HTR).

Ramlan Nugraha, a program officer of PATTIRO, on Monday (05/13/2019) in Jakarta, said that the 2015-2019 RPJMN target for social forestry and forest and land rehabilitation is not likely to be achieved. In the RPJMN, the government was targeting 12.7 million ha of social forestry, and a 5.5 million ha reduction of critical lands.

“Until the fourth year of the implementation of the RPJMN, the realization of the target remains low, and it is not expected to reach 100 percent by the end of the fifth year,” he said.

He explained that by April 2019, social forestry permits have only been given for 2.6 million hectares, mostly in the form of village forest permits. Nevertheless the achievements over the past five years have far exceeded the social forestry carried out in the era of President Susilo Bambang Yudhoyono, with an area of ​​451,813.71 ha between 2007-2014.

In terms of RHL achievement, the reduction of critical land through implementation of RHL in the Forest Management Unit (FMU) and Watershed was 788,083 ha or 14.3 percent of the 2015-2019 RPJMN target (5.5 million ha). This was done by the Centers for the Management of Watershed and Protected Forests (PDASHL) in the regional level with the FMU.

On the other hand, the realization of the use of profit sharing from reforestation funds (DBHDR) by local governments has not been optimal. Based on Ministry of Finance data, Ramlan quoted, as of 2017 there were Rp 4.8 trillion (Rp 4.5 trillion in regencies/cities and Rp 292 billion in the provinces) of remaining DBHDR in the regions. The absorbed amount was only 27.68 percent, or 1.84 percent of the total government transfers of Rp 6.6 trillion.

“On the one hand there is a budget for land rehabilitation, on the other hand there is a lot of ​​land remaining to be rehabilitated. This condition is an anomaly because Indonesia loses the opportunity to conduct RHL, even though the funds are available,” said Maya Rostanty, Director of PATTIRO.

PATTIRO is preparing a policy paper as input to the government. The goal is that RHL can be implemented optimally. Moreover, this year, RHL funds reached Rp 2.778 trillion with a target of 205.78 ha of RHL or a budget increase of 325 percent compared to the 2018 budget of Rp 348 billion.

In a discussion related to the preparation of the policy paper, Friday (1/5/2019) in Jakarta, the Head of the Planning Bureau of the Ministry of Environment and Forestry Ayu Dewi Utari said that most of the DBHDR was used by the regions for the prevention and handling of forest fires. This is an easy step in absorbing the funds, such as for the procurement of equipment/vehicles for fighting forest/land fires.

She also said that RHL is regulated strictly in Ministry of Environment and Forestry Regulation No. 105/2018. Among the stipulations is that the indicator of success must be 80 percent, so that the implementation of activities must be carried out seriously and under close supervision.

The locations of critical lands that require RHL at the Directorate General of Watershed and Protected Forests are clear. “We have given information (about critical land maps) to the governors. In the regions, PDASHLs are transparent because they work together with the local government and other parties on a daily basis,” he said.

Encouraging the Self-Reliance of the Indigenous Papuans (OAP): Suggestions for Papuan Development Priorities in 2020-2024 RPJMN