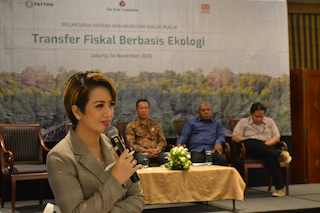 The government has committed to reduce greenhouse gas emissions by 29% on its own efforts and reach 41% with international assistance in 2030, from the state of Business as Usual/BAU. This effort requires synergy between the Government, the Provincial Governments and the Regency Governments in accordance with their respective authorities.

In line with this, commitments to protect forests and the environment have begun to emerge at the regional level. The provinces of Aceh, East Kalimantan, South Sumatra and West Papua have been declared as “green provinces”. Likewise the Kapuas Hulu and Malinau regencies have designated their areas as “conservation regencies”, while Sigi, Siak and Sintang regencies have also declared their areas as “green regencies”. To encourage this commitment to be maintained and implemented properly, it is necessary to implement a policy on providing incentives. In this regard, The Asia Foundation (TAF), together with a network of civil society groups, has drafted a policy text on incentives for ecologically oriented regions through fiscal transfer schemes from higher levels of government to the lower levels.

Through a concept called the Ecological-based Provincial Budget Transfer (TAPE), TAF, together with the civil society network, compiled environmental and forestry indicators that can be used as a reference for the provincial government in providing financial assistance to regencies/cities. To note, so far the transfer of financial assistance from the provincial government to the regencies/cities is done as block grants, without being based on certain criteria and indicators. Through the TAPE concept, TAF and civil society networks encourage the governor to establish regulations regarding the transfer of financial assistance based on environmental and forestry performance. This concept has been adopted by the Governor of North Kalimantan through the issuance of Governor Regulation (Pergub) No. 6 of 2019. Through this regulation, the transfer of financial assistance in the province of North Kalimantan is to be based on five criteria, namely  prevention and control of forest fires, provision of green open spaces, waste management, protection of water resources, and prevention of air pollution.

“The regulation will be implemented in the 2020 fiscal year. We actively socialize to the regency governments,” explained Iqro Ramadhan, Head of the North Kalimantan Provincial Development Planning Agency, in the national dialogue on ecological-based fiscal transfers organized by the Center for Regional Information and Studies (PATTIRO) ) in Jakarta, November 14, 2019. Furthermore Iqro added, the provincial government will continue to work to increase the budget allocation for financial assistance to support the TAPE scheme that has been implemented.

At the regency level, the concept of incentive policies based on environmental performance is encouraged through the Village Fund Allocation transfer scheme (ADD). Through a concept called Ecology-based Regency Budget Transfer (TAKE), TAF and the civil society network encourage the regent to include environmental performance criteria in determining the amount of ADD transfers to villages. One of the regencies that has adopted the TAKE concept is Jayapura Regency through the issuance of Regent Regulation (Perbup) No. 11 of 2019, which includes the Village Development Index (IDM) – one sub-index of which is environmental security.

The Jayapura Regent, Matius Awoutauw, on the same occasion said that the TAKE scheme that has been adopted in the Perbup was an effort to protect indigenous peoples. “For us, indigenous peoples in Papua cannot be separated from the land. By providing incentives to protect their forests and lands, that means we are helping Papuans maintain their customs, “Matius added.

Expanding further on TAPE and TAKE, TAF and the civil society network then also developed the concept of a fiscal transfer incentive scheme from the national government to the regional government called TANE (Ecology-based National Budget Transfer). Some of the indicators offered in the TANE concept include “green policy” innovation, proportion of the budget for the environment and forestry, increase in the area of ​​forest cover, and an environmental quality index. “These indicators can be formulated after much discussion with KLHK and the Ministry of Finance,” said Erman Rahman representing the civil society network. According to him, the indicators must be supported by comprehensive and consistent data that are available periodically every year.

Mohammad Haryono from the Directorate General of Natural Resources and Ecosystem Conservation of the Ministry of Environment and Forestry appreciated the TAPE and TAKE scheme initiatives that have been implemented in North Kalimantan and Jayapura Regency. According to him, in the future it must be ensured that local governments who wish to implement this scheme need to limit the number of indicators, so that they remain focused on environmental indicators. “In our opinion, this ecological incentive is important to focus on broad indicators of forest cover and biodiversity,” Haryono added. In addition, his party also agreed with the TANE concept, that there is an appreciation from the central government for the regions that protect the environment and forests. For this reason it is also necessary to discuss incentives with the Ministry of Finance.

In the short term, the TANE concept is expected to be proposed as an indicator for the transfer of Regional Incentive Funds (DID) in 2021. While in the long run, this concept is expected to be an input for the Ministry of Finance, which is developing the concept of managing the Environmental Protection Fund (DPL) that has been prepared to provide incentives for local governments that have good performance in environmental and forestry protection and management.