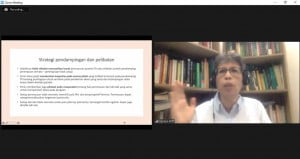 Second, the administrative mechanism for the PS permit application process is still highly gender biased: the policy stipulates that the application for a PS permit must be made by the head of the family, as the sole party who can apply for the permit. As a result of this provision, most of the PS permits are held by men, who in fact generally act as the head of the family. As a secondary impact, women are often not much involved in the management of SF permit groups and are also not involved in any decision-making process, so that the programs and activities formulated often do not reflect women’s needs and problems.

Third, gender issues have not been used as a reference in the process of mapping the SF area. The mapping is still largely based on economic considerations and local wisdom. Yet, gender issues tend to occur in many communities around forests, most of whom are living below the poverty line, such as marginalization, gender stereotyping, the double burden of women, and even gender-based violence.

Fourth, management of data obtained from the monitoring and evaluation process has not been carried out in a manner that disaggregates men and women. Yet, disaggregated data is important as a reference in developing intervention programs to improve policies and governance. In the absence of disaggregated data, gender mainstreaming is not used as a basis for consideration in the preparation of SF programs.

Responding to the preliminary findings of the study conducted by PATTIRO, Suraya Afif said that the gender gap that occurs in SF has its background in the weak involvement of women in SF management. Currently 94% of the members of Social Forestry groups are men. “The management of natural resources in Indonesia has yet to pay attention to gender relations. Most of the beneficiaries of the existing programs are men,” said Suraya Afif.

The varied gender gaps in SF have an impact on the inequality of welfare between men and women. Gender disparities occur both quantitatively and qualitatively. The process of recruitment, mentoring, and reporting on SF management is not yet gender responsive.

In the institutional management of SF groups, the role of women as technical managers of SF remains low, due to socio-cultural and political constraints. This can have an impact on the weak fulfillment of women’s interests and welfare through SF.

Women rarely receive support for capacity building, and even restricted in managing SF. Policy formulation and planning activities related to SF have not accommodated women’s interests.

According to Yulius, a strategy that can be carried out in response to this condition is to mainstream gender in the entire SF business process. The practice of gender mainstreaming in SF is not merely a technocratic issue. “Gender mainstreaming is not only a pragmatic technical issue, the power relations within it are also important,” said Yulius.

Sulistiyono added that it is important to pay attention to local conditions and to provide accessible spaces for women in gender mainstreaming.

By implementing gender mainstreaming in the Social Forestry sector, the social and economic conditions of the community can be developed. This is in line with the government’s commitment in Presidential Instruction No. 9 of 2000 and also the commitment of the Ministry of Environment and Forestry in implementing gender mainstreaming in the forestry and environmental sectors.

Support is Needed in Regional Development Planning and Financial Management