The Civil Society Coalition, initiated by the Center for Regional Research and Information (PATTIRO), Indonesia Budget Center (IBC), and The Asia Foundation (TAF), brought the idea of developing a Regional Incentive Fund for Gender Equality and Women’s Empowerment (DID KGPP) to the fore. Through this idea, the Coalition encourages gender indicators to be included in the criteria for DID, which is annually transferred to local governments. This idea was conveyed in a public discussion held online on April 21, 2021, coinciding with the commemoration of Kartini Day. 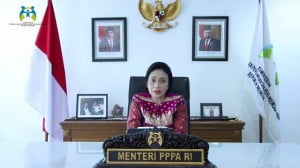 In a speech delivered via video recording, Minister of Women’s Empowerment and Child Empowerment I Gusti Ayu Bintang Darmawati stated that the resolution of women’s issues is highly complex and demands multi-sectoral cooperation. For this reason, support and cooperation between various stakeholders are needed, including support from PATTIRO and the Civil Society Coalition in encouraging the use of budgets that are truly in accordance with the needs of the people, especially in improving the quality of life of women. The Minister also welcomed the DID KGPP concept, which was then followed up by submitting an application letter to the Minister of Finance requesting the inclusion of gender development indicators in the DID scheme for the 2022 fiscal year. 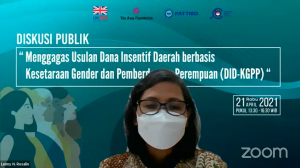 In the public discussion, attending as resource persons were Deputy for Gender Equality of the Ministry of Women’s Empowerment and Child Protection (KemenPPPA) Dra. Lenny Nurhayanti Rosalin, M.Sc, Head of the Regional Incentive Fund Allocation Section of the Ministry of Finance, Nanang Garendra Timur, Director of Superior Product Development for Villages, Disadvantaged Regions, and Transmigration of the Ministry of Villages, Development of Disadvantaged Regions and Transmigration Leroy Samy Uguy, Ph.D, and Head of Gender Mainstreaming, Women’s Empowerment and Family Planning Division, Dinsosduk PPPA Papua Province Adeltje VS Pekade, MM. In addition, representing the Coalition was the Executive Director of PATTIRO Bejo Untung, who conveyed the idea of DID KGPP.

Beginning with an explanation of the DID KGPP concept, Bejo said that such a policy to provide fiscal incentives to local governments is considered important, because although so far local governments have made efforts to encourage gender mainstreaming (PUG) through Gender Responsive Planning and Budgeting (PPRG), but it has not been supported by adequate budgets.

“”As an illustration, in 2017 regional spending for women’s empowerment and child protection was very small, only 0.23% of the total APBD (regional budgets) throughout Indonesia. This number was likely to decrease in 2020 with the policy of refocusing the budget for the handling of the Covid-19 pandemic, “said Bejo.

Bejo also explained that although in 2021 the government has allocated a budget to local governments for service activities to protect women and children through the non-physical Special Allocation Fund (DAK), the amount is still relatively small, only 0.01%.

Further, Bejo explained the background of the DID KGPP concept. So far, the government has had a strong commitment to promote gender equality in Indonesia. This commitment was marked by, among other things, the issuance of Presidential Instruction (Inpres) No. 9/2000 on Gender Mainstreaming in Development more than two decades ago. This Presidential Instruction was then followed up with the issuance of a Joint Circular Letter (SEB) of four ministers, namely the Minister of National Development Planning/Head of Bappenas, the Minister of Home Affairs, the Minister of Finance and the Minister of Women’s Empowerment and Child Protection in 2012, on the Strategy for the Acceleration of Gender Mainstreaming (PUG) through Gender Responsive Planning and Budgeting (PPRG). Based on this policy, all Ministries/Agencies and Local Governments are encouraged to integrate PUG in their planning and budgeting processes. Consistent with this commitment, PUG is also always integrated into the National Medium-Term Development Plan (RPJMN), including the RPJMN for the 2020-2024 period.

At the global level, the commitment for gender mainstreaming is demonstrated by the involvement of the Indonesian government in agreeing on the Sustainable Development Goals (SDGs), in which gender equality and women’s empowerment are included as one of the goals. These various commitments should be appreciated, although efforts to achieve gender equality and women’s empowerment still need to be improved. Various indicators show the high gender gap in Indonesia. Based on data from the Global Gap Gender Report (2019), Indonesia’s Gender Gap Index (GGI) still shows an unsatisfactory value; in the last 13 years (2007-2019), although the average value of Indonesia’s ranking is quite high (85 out of 153 countries), its growth is relatively low, at only 0.5%. At the ASEAN level, Indonesia’s GGI ranking compared to other countries is also still relatively low, at the 5th place, below the Philippines, Laos, Singapore, and Thailand.

Another indicator that shows the existence of a gender gap is the high inequality between men and women in the Human Development Index (HDI). Although the HDI value continues to increase from year to year, it is not accompanied by an increase in the value of equality between men and women. This shows that the value of Indonesia’s Gender Development Index (IPG) is still low. The low IPG is found in many regions in Indonesia. Based on BPS data (2019), 19 out of 34 provinces have IPG scores below the national average. A more concerning condition is seen in the achievement of the Gender Empowerment Index (IDG). Based on 2019 data, from 34 provinces, most have IDG scores below the national average and only five provinces have IDG scores above the national average. The low IPG and IDG scores, which are almost evenly distributed throughout the provinces, show that local government efforts are still low in promoting gender equality and empowering women. In fact, the role of the region is very important to achieve the realization of successful gender development at the national level.

Gender Indicators in the DID Scheme

Although there are many types of fund transfer schemes from the national government to the regions, the Civil Society Coalition proposes the DID scheme as an incentive scheme for regional performance related to gender development. This is based on several reasons, including: 1) The purpose of DID as an incentive is in line with the objective of providing incentives to areas related to gender development performance; 2) Motivating regions to improve and maintain their performance; 3) DID allocation increases every year; 4) Perpres 42/2020 has regulated the awarding of awards in the form of DID to Regional Governments; and 5) Institutionalization and implementing regulations through the APBN Law and PMK Management of DID.

According to the Civil Society Coalition, in the current DID scheme, there are no categories and indicators of performance assessment that confirm regional performance in realizing gender equality and empowering women. In this regard, the Civil Society Coalition proposes two DID-KGPP reform schemes. First, gender indicators are to be integrated into the existing DID performance assessment in the performance categories of Fiscal Health and Regional Financial Management, Basic Education Services, Public Services, Government and Community Welfare. Second, proposing new indicators in the DID that reflect gender development performance, namely the Gender Development Index (IPG) and the Gender Empowerment Index (IDG).

The Coalition hopes that the enactment of DID KGPP will increase the commitment of local governments in implementing KGPP development, accelerate the implementation of PUG and PPRG in the regions, and support the achievement of KGPP indicators in the 2020-2024 RPJMN. In addition, this incentive is also expected to reduce the gender gap without burdening the KemenPPPA’s Expenditure Ceiling, because the source of funds is based from transfer spending to the regions, namely DID.

“”We have submitted a letter to the Minister of Finance on March 5, 2021, proposing IPG and IDG as one of the performance categories for the DID allocation in 2022. In addition to the performance category, it is hoped that the Ministry of Finance can support additional IPG and IDG and also others that have been submitted can be sharpened because the data and facts exist. For example, APM is available to the districts/cities level,”,” said Leny.

However, according to Leny, the Ministry of Finance has not responded to the letter. He hoped that the Ministry of Finance could open a discussion space to discuss the proposal. “We don’t know if we will only add KGPP, or if there is a need for additional indicators pertaining to children as well, because the RPJMN has included those, namely a comprehensive Child Protection Index, whose data are available yearly in provinces and districts/cities in the context of gender equality, several considerations already submitted in the letter,” added Leny.

Leny also conveyed several reasons for the PPPA Ministry to support this idea. According to Leny, in the last two years, the closing of the gap in the progress of HDI between men and women in Indonesia has not been significant. In 2018 and 2019 (71.39% and 71.92%), the HDI for males was still higher than the HDI for females. In addition, the IPG in Indonesia in 2018 and 2019 also experienced not too significant changes, namely from 90.99% to 91.07%. Therefore, affirmative policies are needed to close the gender gap.

“With the higher HDI of men compared to that of women, one thing we can do to close the gap is through a budget policy, including the idea of DID KGPP,” said Leny.

In addition to HDI, another reason is that the IDG data movement in 2018 and 2019 experienced a fairly significant growth, from 72.10% to 75.24%, but provinces that were above the national average experienced a decline.