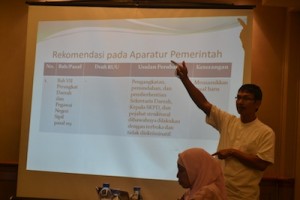 The draft law on local government that is being discussed in the House of Representatives is considered to still provide opportunities for the emergence of discriminatory regional regulations (Perda). This point emerged in a focus group discussion held by the Regional Research and Information Center (PATTIRO) at the Ibis Hotel, Friday (15/3).

“Because from the facts, we have received reports about discriminatory bylaws,” said Komnas Perempuan Commissioner Hussein Muhammad, who was one of the participants in the discussion. She took the example of a bylaw prohibiting women from going out at night in Tangerang. This can be repeated because there is an explanation of one of the articles of regional special conditions. The discussion participants also thought that if the provisions were not limited in interpretation, it would actually give the opportunity for the emergence of strange rules. For example, regulations that regulate the sitting position in motorized vehicles in Lhokseumawe.

Another problem that arose in the discussion with the theme “Equality and Justice” in the Local Government Bill was inconsistency with other laws. One of them is with Law No. 14 of 2008 concerning Information Disclosure. In this draft, sanctions for government officials who close information are only administrative penalties. Meanwhile, the Information Disclosure Law regulates criminal penalties.

In addition, women’s empowerment is not covered in matters of compulsory basic services. In fact, this is a basic matter that has been regulated in the Minimum Service Standards at the Ministry of Women’s Empowerment and is implemented by the local government. It is feared that this will not be a priority in shopping and programs.

One of the proposals produced is that the revision of this law must be in accordance with other rules. Not only the Information Disclosure Law, but also with Public Services, and other regulations. Second, further ensure that gender equality and justice are implemented in people’s lives through strategic policies both in terms of access, participation, control and utilization of development outcomes.