A number of Regional Heads who have and are implementing Ecological Fiscal Transfer (EFT) schemes have gathered in Bali for the Bali Green Leadership Forum, Thursday, January 23, 2020. The event, organized by the Center for Regional Studies and Information (PATTIRO) and The Asia Foundation (TAF), was attended by North Kalimantan Governor, Irianto Lambrie, Jayapura Regent Mathius Awoitauw, Bener Meriah Regent and representatives of Sigi and Kubu Raya. Also present were representatives from the Ministry of Finance’s Fiscal Policy Agency, the Directorate General of Regional Financial Development of the Ministry of Home Affairs, and the Ministry of Environment and Forestry’s R&D and Innovation Agency.

North Kalimantan Province is the first area to apply the EFT concept through the Ecology-based Provincial Budget Transfer (TAPE) policy as outlined in Governor Regulation (Pergub) No. 6 of 2019 concerning Amendments to the Governor Regulation No. 49 of 2018 concerning Procedures for the Granting, Distribution and Accountability of Financial Aid Expenditures. Through this regulation, the transfer of financial assistance in the province of North Kalimantan is based on five criteria, namely prevention and control of forest fires, provision of green open space, waste management, protection of water resources, and prevention of air pollution.

At the regency level, the EFT concept has been applied by Jayapura Regency through Regent Regulation (Perbup) No. 11 of 2019 concerning Village Fund Allocation (ADK). Through this policy, the ADK formulation is based on environmental indicators, which become the sub-indicators of the Village Development Index (IDM). This ecological budget transfer scheme from the regency to the villages is hereinafter referred to as Ecology-based Regency Budget Transfer (TAKE).

North Kalimantan Governor Irianto Lambrie, in a discussion session, said that he felt it was important to implement the TAPE concept as a commitment to realize the North Kalimantan Province as the Heart of Borneo. Through this scheme, the commitment is not only realized by the provincial government, but also by the regency and city governments.

“We are indeed not the best, but we dare to be the first to apply this concept,” said Irianto. According to him, with good intentions and commitment, going forward can produce something good too. For example, through serious efforts, North Kalimantan succeeded in preventing forest and land fires in its area. Through this serious effort, in 2019 there were no cases of forest and land fires in the province. 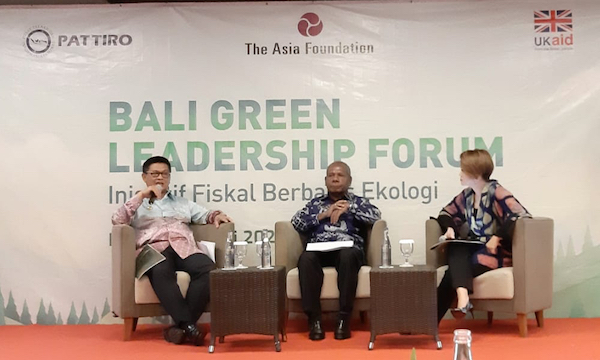 Meanwhile, Jayapura Regent Mathius Awoitauw stated that through the TAKE scheme, it was hoped that the budget incentives transferred to the villages could be utilized by indigenous peoples to carry out environmental protection activities. This is because according to him, indigenous people are the parties who know best how to manage their environment. “These are people who have hundreds of years of knowledge on how to protect their forests,” Mathius said. Mathius expects that more regions will apply this concept.

Through this forum, several representatives of regional heads who are developing TAPE and TAKE policies, including the regents of Sigi, Bener Meriah, and Kubu Raya hope to learn more from North Kalimantan and Jayapura, especially in the preparation of formulas and indicators. They also expressed their hope for support from the central government through the issuance of regulations, as well as support from civil society groups. Furthermore, they also expect that the central government can also implement EFT at the national level.

Related to the EFT scheme at the national level, Researcher of the Fiscal Policy Office of the Ministry of Finance Joko Tri Haryanto stated that fundamentally this concept has been applied in the Regional Incentive Fund (DID) scheme. The scheme, which began to be implemented in 2011, has included one environmental indicator, namely waste management. “In the future, this indicator can be developed, not only waste management, but for example into an Environmental Quality Index,” he said further.

TAF Senior Program Director Erman Rahman added that his party had discussed with the Ministry of Environment and Forestry to develop the concept of EFT at the national level, which is referred to as TANE (Ecology-based National Budget Transfer). “Our hope is that not only through DID, but this concept is to be applied in the Environmental Protection Fund (DPL) scheme which will be regulated in the Central-Regional Financial Relations Draft Bill,” Erman added.

In this activity the regional heads agreed to create a more solid forum as a means of communication and learning, to encourage improvements to this concept in the future.