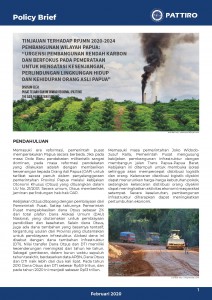 With the advent of the Reformasi era, the central government began treating Papua differently. While during the New Order, the militaristic approach was highly dominant, during the reformasi period, the approach undertaken was to give authority to the Indigenous Papuans (Orang Asli Papua, OAP) to be fully involved in the administration of the Papua Province through the Special Autonomy (Otsus) policy as outlined in Law No. 21/2001. In general, Otsus guarantees the protection of OAP rights.

Under Joko Widodo and Jusuf Kalla, the Central Government began to carry out infrastructure development policies by building the Trans Papua-West Papua road. This policy was taken to open isolation so that it would speed up the distribution of logistics and persons. The smooth distribution of logistics is believed to reduce the prices of basic necessities, while ease of travel is believed to increase the economic activities of local communities. Overall, infrastructure development is expected to increase economic growth.