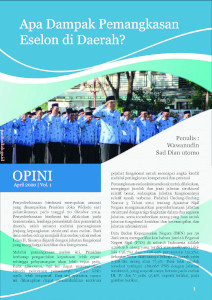 Simplification of the bureaucracy is a mandate delivered by President Joko Widodo during his inauguration on October 20, 2019. Simplification of the bureaucracy is carried out at ministries, government agencies and local governments, of which one method is through trimming the structural ranks or echelons, from five echelons to only two namely echelons I and II. The remaining ranks are replaced by functional positions that value expertise and competence.

Through this simplification of echelons, the President hopes that decision making will become faster, and services as well. In turn, this can improve the performance of government services, so that they become more responsive. On the apparatus side, this effort is expected to foster the motivation of functional officials to achieve credit through increasing competence and achievement.