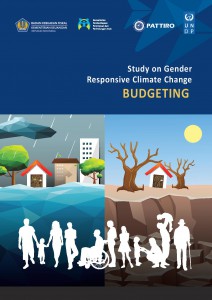 The effects of climate change can affect entire societies in different parts of the globe. Where parties most affected by climate change are developing countries and vulnerable groups in society, such as women and children. A study conducted by the London School of Economics and Political Science of 141 countries affected by disasters in the 1981−2002 period also found a close link between natural disasters and women’s socioeconomic status. Natural disasters result in a decrease in women’s life expectancy and an increase in gender gap in society. This shows that women suffer from the most impact from various natural disasters. As a result, there has been an increase in poverty rates among women and the opening up of gender inequality, because women have to bear the burden of dual responsibility, which is heavier than men.

Women are vulnerable to increased poverty as a result of climate change because they oGen work in the informal sector, such as agriculture or plantations, by becoming casual daily laborers or helping their husbands without formal working ties with plantation companies. This condition makes women vulnerable to economic impacts because women who work in the sector will lose their livelihood in the event of a natural disaster. In addition, the position of women who are not decision makers in the family remains a barrier to realizing economic initiatives to increase alternative sources of income for their families.

The same problem is experienced by women who are heads of families. According to BPS data for 2017, there are around 9.9 million households headed by women who will be negatively affected by natural disasters. Although they tend to be freeer in making decisions, in society women are disadvantaged because of limited access to resources, restricted rights and aspirations that have not been voiced in the decision making process so that women’s social and economic conditions will not necessarily be better. In general, Indonesia is facing a serious problem of poverty inequality.