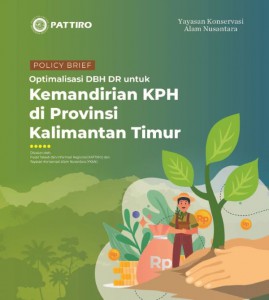 Reforestation Revenue Sharing Funds (DBH DR) are potential fiscal resources to support the acceleration of the independence of Forest Management Units (KPH). DBH DR utilization for funding has been allowed through the State Budget Law. The utilization of DR DBH as part of regional rights should be encouraged to realize the KPH independence target.

Up to 2019, based on data from the East Kalimantan Forestry Service, the utilization of DBH DR has reached Rp 179.3 billion or 31.24% of the total. This figure resulted in the large amount of SiLPA in the local treasury: until 2019, the amount has reached Rp. 394.8 billion. Of this amount, Rp. 176.3 billion has been budgeted in the FY 2020 budget, and the remainder of Rp. 218.5 billion remains in the regional treasury.

To find out in more detail what factors caused the less than optimal utilization of DBH DR, and East Kalimantan Province’s commitment in realizing the independence of the KPH, as well as the proposed policy recommendations, read and download the file below (in Indonesian language)

PATTIRO and KemenPAN-RB are holding Virtual LAPOR! Goes To Campus