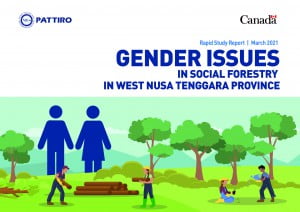 Data from the Directorate General of Social Forestry and Environmental Partnerships (Ditjen PSKL), Ministry of Environment and Forestry (KLHK), show that the average income of community forest farmer households reaches IDR 28,340,724 per year, or IDR 8,640,000 per capita per year (Ditjen PSKL 2020-2024 Strategic Plan). This figure is above the poverty line income threshold of IDR 5,455,824 per capita per year, based on the measurement of the Central Statistics Agency, March 2020. The Katadata Insight Center

(KIC) survey of 103 Social Forestry Business Groups (KUPS) shows 98.4% respondents stated that their income had increased. One of them is the Margomulyo Forest Farmers Group in Burno Village, Lumajang, East Java, whose income has increased sixfold (from IDR 7.8 million/hectare to IDR 44.6 million/hectare) compared to before joining the social forestry program (KIC, 2020) .