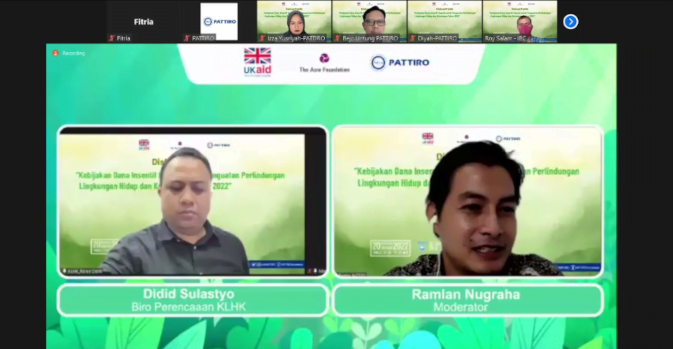 The civil society coalition for environmental funding appreciates the government’s steps to expand environmental management performance indicators in the 2022 Regional Incentive Fund (DID) scheme.  Through the expansion of indicators, it is hoped that it can motivate local governments (Pemda) in improving environmental and forestry management performance. This was conveyed by Maya Rostanty as a speaker in the public discussion themed “DID Policy for Strengthening Environmental and Forestry Protection in 2022” which was held by PATTIRO on Thursday (1/20).

“The expansion of environmental management performance indicators by the government also proves that the government, in this case the Ministry of Finance and the Ministry of Environment and Forestry, is open to civil society input on the idea of an Ecology-Based National Budget Transfer or TANE. This is a positive thing that needs to be developed in the future, including in overseeing the implementation of DID in 2022 and beyond,” said Maya, PATTIRO Senior Advisor.

According to Didid Sulastyo from the Planning Bureau of the Ministry of Environment and Forestry (KLHK), the expansion of performance indicators in the environmental DID is expected to encourage improvements in environmental and forestry quality at the site level, and is also in line with national development. In addition, this ecology-based incentive scheme aims to provide rewards to local governments that successfully manage LHK and encourage other local governments to improve LHK management performance.

“The determination of the assessment is based on IKLH data and waste management using baseline data for the last 2 years in the regions, which are then compared with all regions in Indonesia and then ranked. KLHK provides cut-off at a value of 72, then we will convey the data to the Ministry of Finance, which will later calculate the amount of the allocation. In this process, the Ministry of Environment and Forestry only proposes nominations for recipients, based on rankings, who work well in managing LHK in the regions, ” continued Didid. 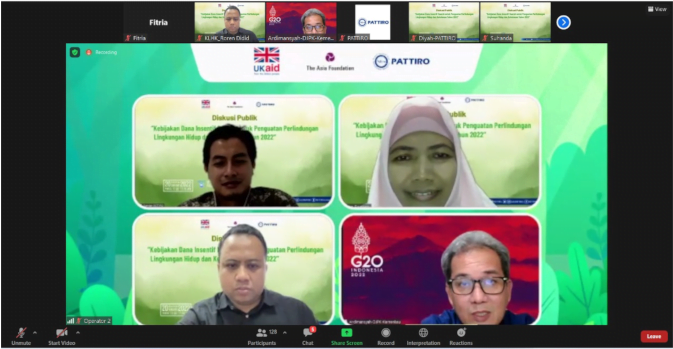 Meanwhile, the DID assessment mechanism for the environmental sector in 2022 is based on several variables, including: Water Quality (10%), Air Quality (15%), Land Cover (30%), Waste Management (40%) and Local Government Commitment (5 %). After being assessed by the Ministry of Finance, in 2022 there will be 26 Local Governments that receive DID in the field of Environment. The ceiling provided by the government this year is IDR 56.25 billion. “In 2022, there will be 26 local governments that receive environmental DID allocations. The number has increased from the previous year, with only 16 local governments. However, this year’s allocation has decreased from IDR 130.5 billion to IDR 56.3 billion due to the pandemic,” said Ardimansyah, Head of the Sub-Directorate of the Special Autonomy Fund, DID, and the Privileges Fund of the Ministry of Finance.

One of the DID recipient areas is Sigi District, Central Sulawesi, which received IDR 1.15 billion in funds. According to the Head of the Environmental Office of Sigi District, Afit Lamakarate, who was also present in the discussion, one of the factors that influenced the selection of Sigi as a DID recipient in the field of Environment, apart from the Green Sigi commitment was also the implementation of the Ecology-based Regency Budget Transfer (TAKE). “The adoption of TAKE in Sigi through the reformulation of transfer funds to villages has been quite effective in encouraging the village governments to protect the environment. This is because there are incentives for colleagues who carry out environmental and forestry management in rural areas,” said Afit. Regarding the planned use, Sigi District will allocate the DID it receives for planting of bamboo as a barrier against erosion and potential for flooding and landslides, construction of a waste landfill, and the development of new green open spaces.

The representative of the civil society coalition, Roy Salam, welcomed the results of the DID assessment that had been submitted by the government. According to him, there are three regions that will receive the 2022 DID, which are those that have adopted the TAPE and TAKE policies. The three are North Kalimantan Province, Sigi District, and Nunukan District. The existence of a new policy in the 2022 DID assessment mechanism provides an opportunity for regions that have good environmental performance to get incentives from the government, including regions that are encouraged by civil society in implementing the EFT scheme in the regions through Ecology-based Provincial Budget Transfers (TAPE) and Ecology-Based District Budget Transfers (TAKE). 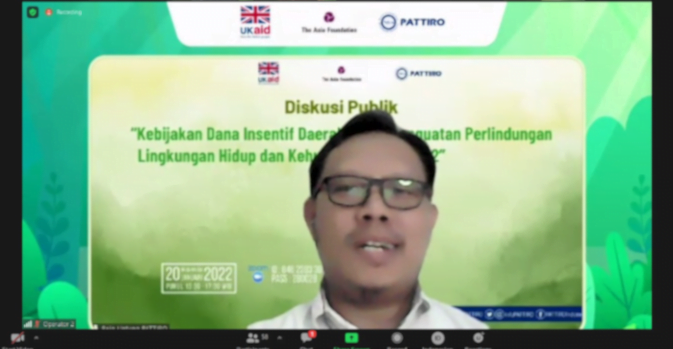 In addition to the appreciation given to the government, the civil society also provides input to the government regarding the challenges in implementing the DID policy, as stated by PATTIRO Executive Director Bejo Untung in the closing session. First, the central government needs to carry out intensive socialization so that the evaluation process for motivated local governments can be carried out transparently. Second, the synergy of the Civil Society-Government Coalition in optimizing the implementation of the Environmental Management Performance Category DID to motivate local governments to improve environmental management efforts. Finally, it is necessary to encourage increasing the allocation of DID so as not to raise concerns regarding the sustainability of the DID scheme in the coming years, DID is not included in the category of Financial Transfers to Regions (TKD) in Law Number 1 of 2022 concerning Financial Relations between the Central Government and the Regional Governments (UU HKPD).

This online public discussion was attended by 122 persons consisting of 77 men and 45 women from various agencies such as Ministries/Agencies, Provincial and District/City Governments, Universities, Development Partners, Media and the general public.