Can National Parks be Transformed into Public Service Agencies? 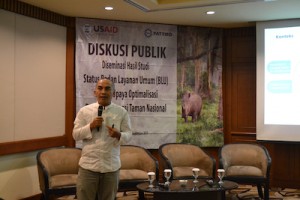 While increasing the number of visitors to National Parks can indeed increase revenue for the state treasury, on the other hand, it is also feared to threaten the preservation of biodiversity and ecosystems in national parks. The discourse to encourage national park management centers to implement the  Public Service Agency (BLU) Financial Management Pattern (PPK) has also re-surfaced.

Data from the Ministry of Environment and Forestry (KLHK) states an increase in tourist visits to conservation areas in the 2012-2016 period from 4.32 million people to 7.29 million people. In particular, a rapid increase in visits also occurred in national parks (TN). In Halimun Salak National Park (TNGHS) the number of visits was 131,073 people in 2016 and then increased by 61,960 people to 193,033 people in 2018. While in Bromo Tengger Semeru National Park (TNBTS), the average increase during 2016 to 2018 was 185,000 people per year.

Increasing the number of visitors to the TN area that leads to mass tourism has the potential to cause problems, especially for the preservation of biodiversity and existing ecosystems.

On the other hand, the high number of tourist visits is directly proportional to the non-tax state revenue generated. For example, in 2017, the realization of PNBP TNBTS reached Rp 22.1 billion. This amount is 134.82% greater than the target of Rp 16.3 billion.

The increased revenue from national parks is clearly good news. Moreover, it is no longer a secret that the budget provided to manage conservation areas is minuscule. The average budget provided by the government is around IDR 1.5 trillion/year, equivalent to IDR 68,000 or only US $5 per hectare (ha), far below the annual budget requirement of $18.6 per hectare.

Director of the Center for Regional Information and Studies (Pattiro) Maya Rostanty said, encouraging national parks to transform into BLU became an option that could be chosen to respond to the situation. “By becoming a BLU, national parks can be creative and innovative to manage their finances directly and independently to support the management of the region so that the preservation of biodiversity and its ecosystem can be maintained while at the same time improving the welfare of the surrounding community,” she said in Jakarta, Wednesday (09/25/2019) .

Pattiro has conducted research studies in three national parks namely TNGHS, TNBTS, and Gunung Gede Pangrango National Park (TNGGP) about the possibility of transforming management in the three NPs into BLU. The study was conducted since early 2019 and presented to the public in Jakarta, Wednesday (09/25/2019). The study was designed to provide a recommendation for NP funding policies that can be carried out sustainably. The study results are expected to be adopted in the Ministry of Environment and Forestry (KLHK) strategic plan.

From the results of the study, it was revealed that there was policy support through various laws and regulations concerning the formation of BLU in national parks. One such regulation is Government Regulation (PP) No. 34 of 2002 concerning Forest Management and Preparation of Forest Management Plans, Forest Utilization and Use of Forest Areas. The PP provides support to NP to conduct zoning for further development as a potential for improving service performance, which is one of the technical requirements of the BLU.

In terms of fulfilling the requirements of a BLU, in general the three NPs studied have the capital to meet all the requirements: substantive, technical and administrative aspects in accordance with the Minister of Finance Regulation No. 180 of 2016 concerning Determination and Revocation of the Application of the PPK BLU in Government Agencies.

One administrative requirement that has not yet been fulfilled by the three national parks is the existence of service standards.

Pattiro researcher Agus Salim said that to carry out the role of a BLU, the NP’s organizational structure needs to be improved according to its function. “In the BLU framework, there should also be an internal PNS unit,” he said.

He said that according to its functions a National Park that has been transformed into a BLU must be able to carry out its functions from the ecological, economic, and socio-cultural aspects. “In terms of service, the most important thing is whether the NP can increase the existing animal population,” he said.

The Director of Environmental Service Utilization and Nature Tourism at the Ministry of Environment and Forestry Asep Sugiharta said, a number of NPs indeed received a sizeable amounts of income. Based on statutory provisions, all of the income is deposited in the state treasury as PNBP. “In practice, there are also those who question that while there is a target (PNBP) there is no impact on returns,” he said.

He said, in relation to revenue management in NPs, several years ago there had been an effort to encourage TN to implement PPK BLU. However, the effort did not continue.

According to him, one of the obstacles to encourage the implementation of BLU in the National Park is the matter of policy support. In accordance with the main tasks and functions (tupoksi), national parks do not have the mandate to run a business. Likewise, the role of the Directorate General of Conservation of Natural Resources and Ecosystems (KSDAE) of the Ministry of Environment and Forestry (KLHK), which is the guiding agency “In accordance with Law No. 5 of 1990 concerning Conservation, the tasks and functions of an NP is not doing business process, but conservation,” he said.

Asep admitted that a solution related to NP financing is needed. An alternative that is being initiated is to implement the concept of balance related to the income obtained by TN. “We were informed that for non-tax revenues, 20% can be returned to the producer,” he said.

Based on this information, said Asep, the funds returned were not intended to finance operations, but to improve services and for facilities and infrastructure.

Asep said, whatever the financing patterns that can be applied, the most important thing is to be able to support the role of national parks to provide protection for life support systems, preservation of plant and animal species diversity, and the sustainable use of natural resources and their ecosystems.

An important point that must be fulfilled so that a work unit can be approved to become a BLU is that the services provided must be better. Later, the improvement of the service will be tested by the development agency.

Meanwhile, biodiversity conservation expert Professor Hadi S Alikodra reminded about the importance of increasing the capacity of human resources if they want to apply BLU to TN. The increase in human resource capacity is not only limited to NP managers, but also to the surrounding community. Sugiharto.