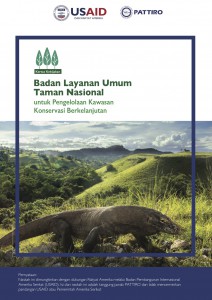 Indonesia is a “megabiodiversity country”, because it has large amounts of biodiversity and natural wealth, such as beautiful and unique natural panorama. National parks (Taman Nasional) are the last strongholds for the protection and preservation of Indonesia’s biodiversity.

The role of national parks as conservation areas is carried out with a variety of existing limitations, including unharmonious relationships with surrounding communities, lack of human resources, budget constraints, damage to flora and fauna habitats due to forest damage and degradation due to illegal logging and inappropriate land use practices, population growth, logging and forest fires. Regarding the issue of limited budget support, in IBSAP 2016, Jefferson (2014) explained that conservation funding needs are estimated at USD 18.6/ha per year in the 2010-2020 period, but the average budget obtained is USD 5.1/ha per year ( reference 1999) 1, so that there is a budget gap of USD 13.5/ha per year or equivalent to Rp. 189 thousand per hectare.

On the other hand, national parks have the potential for utilization and development, both the rich biodiversity and beauty of nature as tourist attractions. Utilization of the potential of national parks has resulted in Non-Tax State Revenue (PNBP). One of the breakthrough opportunities for NP management is through the form of a Public Service Agency (BLU). BLU is an agency within the government formed to provide services to the community in the form of the supply of goods and/or services sold with no priority of seeking profits, and carrying out its activities based on the principles of efficiency and productivity. BLU is an alternative to increase productivity, innovation and creativity in NP management, because it has financial management flexibility based on economic and productivity principles, as well as the application of sound business practices. The flexibility of the BLU includes, among others, financial management (funds, debt, receivables, and formulation of standards, policies, systems and procedures for financial management), management of goods/services, and investment management. With this flexibility, it means that the national parks can manage their receipts directly for their operations, determine TN BLU rates according to their potential, develop the potential and assets of the TN in order to improve its performance and increase revenue through cooperation with third parties or grants.

Noting the extent of which they have fulfilled the requirements to become public service agencies based on PMK No. 180/2016, the three studied NPs  have met the initial substantive, technical, and administrative requirements. Other NPs can also be proposed as long as they meet the three initial requirements to become a BLU. By looking at the diverse conditions of NP management, two criteria were developed, namely the METT value and the PNPB value, which can be used to identify the NPs that should be prioritized to be transformed into BLU. Based on these two criteria, there are five parks that can be proposed to be transformed into National Park Public Service Agencies, namely Komodo National Park (East Nusa Tenggara Province), Bromo Tengger Semeru National Park (East Java Province), West Bali National Park (Bali Province), Mt. Rinjani National Park (West Nusa Tenggara Province) and Tanjung Puting National Park (Central Kalimantan Province).

The steps to realize the public service agency status, to achieve the goal of becoming a sustainable conservation area, begin with the designing of the management of the NP PSA status using a collaborative governance approach, namely by involving all stakeholders. The involvement of stakeholders in the management of conservation areas should also provide equal opportunities for men and women, both in the realm of NP management and in the realm of society through providing equal access, participation and control, so that the benefits of the presence of the NP can be felt by all parties .

Considering the importance of PSA status for National Parks, an effort is needed to accelerate the process of changing national parks from PNBP Working Units to BLU Working Units. To that end, KLHK as a ministry that supervises NPs must have a road map to begin the process of changing the status in question. After obtaining BLU status, national parks also still needs policies that support their operation. These policies include: (i) BLU Financial Management Policy; (ii) BLU Planning and Budgeting Policy; (iii) BLU HR Policy; and (iv) BLU Remuneration Policy. To realize the National Park BLU, a number of recommendations were made addressedto the Ministry of Environment and Forestry, the Ministry of Tourism and Creative Economy, the Ministry of Finance and Bappenas.